Besides using my personal poetry as bookmarks to share, if the theme of the poem is appropriate I use them for cards as well.


Inspiration: Most of these feature poems I wrote in Jr High and High School, though a few are from college.  I always wanted an easy way to share them with others so I turned them into bookmarks.

How I Make Them: For some, I've created templates and cut-outs that I add to the bookmark.  The artwork is always related to the poem.  Then, I write out the poem using Gel Pens. If I'm going to do any hand-drawing on the bookmark, that comes next.  When I'm finished, I laminate them with my E-Z Laminator.
Posted by LBK at 9:00 AM No comments:

Inspiration: We made these as the craft project for my daughter's recent 3rd birthday party.  Her party had a Dora & Diego's Winter Adventure theme.

How I Prepped the Craft: Before the party, I put together ziploc bags with all the parts for the craft that included:
How We Finished them at the Party: Each child was assisted by a parent (mostly because these were toddlers between the ages of 3 and 5).  Each child got their ziploc back and boxes of Zots were available for the parents to use to help secure pieces where needed.

Final Thoughts: Overall I think it was a good project.  I did have to do quite a bit before the party.  I'm sure older kids could have done more.  Maybe one day I'll find a better adhesive to use with this age group.
Posted by LBK at 5:00 PM No comments: 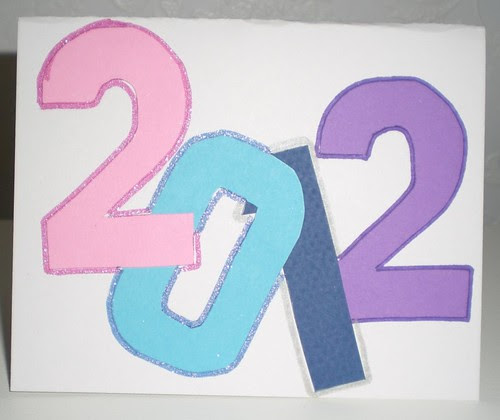 Inspiration: For Christmas & Rosh Hashana (Jewish New Year) every year I try to do similarly styled cards.  In keeping with that, I used the calendar years for this year's cards.

How I Make Them:  I started by making templates for the numbers.  I used a ruler, compass and notecards and only made the numbers I needed.  I used the templates to trace my numbers on different colored paper.  After the numbers were all cut out I glued them onto the card stock - trying not to just glue them in a straight line so they looked a little more artistic.  I also used markers to outline and decorate the numbers to give them some embellishment.  Inside the card I wrote a message about the related holiday. 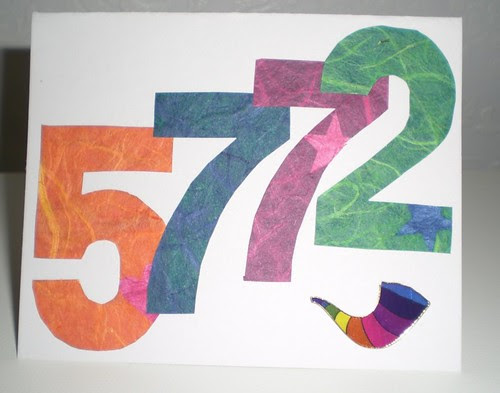