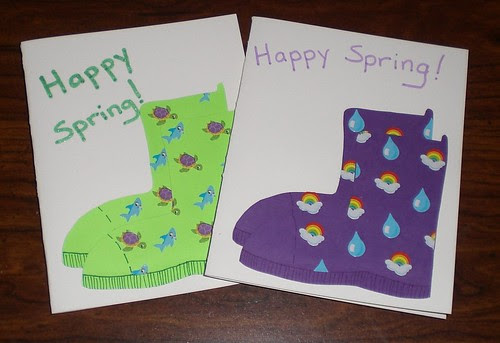 Inspiration:  Since I used ice skates for winter, I decided to stay on the theme of shoes to cover the four seasons this year.  What says spring more than rain and galoshes!

How I Made Them:  So I often start by sketching out a concept card. Here is a photo of that concept card.  Even came up with the inside saying before actually making my cards.  Here is a photo of the inside of the card.  I did cut out the boot shape from my concept card to act as a template for the boot.  Then I work on cutting out the boots, trying to get as many on a sheet of paper as possible.  After getting the boots cut out, I glued them together and added the stickers.   I went to Education Avenue to get the sticker (teacher or educational supply stores are a great source for stickers).  As you can see in the photo, I used a gel pen to add the lines for the sole of the boot and to separate the toe area. Then I glued the boots to the card, used a Martha Stewart Glitter Marker to write Happy Spring! on the front.  On the inside, I wrote my little poem:
Laughter reigns while
puddle jumping and raindrop dodging.
Little snowdrops and green
bulb plant stems dot the ground.
Loving Mother Nature blankets
us in a rainbow of hope.