Admittedly, I much prefer paper crafts but once in a while I get in the mood to do something else.  While very little sewing uses paper, I do have paper templates I use to make these dolls (so it sort-of counts). 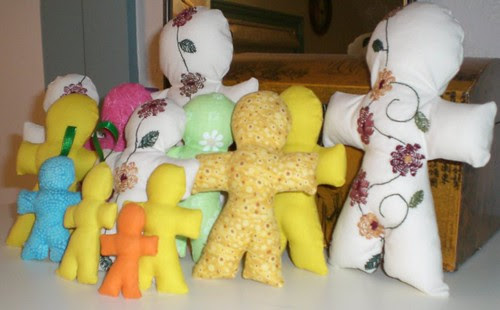 Inspiration:  A discussion had come up on the Geochums website (a forum that I belong to with a bit of a local geocaching flavor) about making dolls like the site's mascots, Lonnie & Lattie.  I figured, why not?  At the time (back in something like 2005 or 2006) I made two really large versions (Lattie in orange and Lonnie in green).  Then I made some smaller ones.  Then I thought, well, Lonnie & Lattie had 4 kids - East, West, South & North, and I made those in other colors (yellow, purple, red & blue).  I eventually just started making them in any scrap material I had around that looked kind of neat and in different sizes.  Just not the really large ones (took too much stuffing).  So I have a medium, a small, and a tiny.  I even once made an itty bitty one but it was too hard to stuff so I'm not doing that again.

How I Make Them:  I made different size templates by taking image files from the website and printing them at different sizes using Word (kind of lazy, but it worked).  For the sizes I like, I eventually copy them onto cardboard so they last a little longer (image).  I trace the templates onto the wrong side of the material (which is folded in half with right sides facing).  I cut them out leaving at least a 1/2 in margin (larger in places that would be a tight cut) (image).  I sew along the traced line leaving the side of one of the legs open to turn the doll out and stuff it.  Then I trim closer to my stitched edge and cut little triangles out around the head to help with the turning (image).  Then I turn it out.  I use a plastic yarn darner to help push the edges as far out as they'll go (image).  Then I stuff the doll and sew it closed it with nice hidden slip stitch.