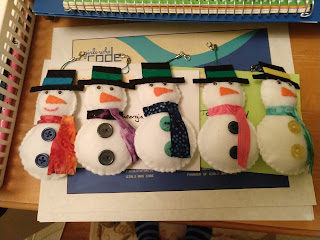 Inspiration: Our neighbors have some nice traditions at the holidays.  One couple stops by on Christmas Eve each year and delivers a bag full of cookies and a fruit/nut bread along with some yummy Bourbon Balls.  Others just drop off cards, sometimes with cookies or a small gift.  We often drop off hamantaschen during Purim (any where from early March to mid-April) and cards for different holidays.  Given the stay at home orders this year and knowing many of our neighbors were staying home for the holidays and unable to celebrate with their extended families, I made extra little ornaments to drop off with our cards.

How I Made Them: Like most of my ornaments, I started with making templates.  I made one for the body/head that was a slightly smaller circle above a larger one.  I made a template for the hat and the hat band and one for the carrot nose.  Using the templates for each snowman, I cut from felt:

Then I glued the bad to the hat.  I stitched the nose near the head and stitched the hat onto the head.  All with embroidery floss (orange for the nose and black for the hat).  For the first set I made, I glued on googly eyes.  For the second set, I sewed on blue or green pony beads for the eyes.  I searched through a jar of old buttons I had looking for matches.  I used pairs to sew onto the bodies.  Then I took quilt fabric scraps cut into 2" squares.  I folded one into thirds and sewed it around the neck.  I took a second one more loosely folded in thirds and secured one end at the neck and then cut little slits at the far end.  It made a nice scarf.  I used white embroidery floss and blanket stitched the back of the head/body onto the decorated front, pausing to add a lobster claw hanger and to stuff it with polyfill.

Alternatives: There are so many ways to be creative with these.  Besides switching eyes between googly eyes and pony beads, other things I might try in the future include:

Thanks for leaving a comment. It will be posted as soon as I've had a chance to review it.